ONE YEAR!!!
ONE YEAR!!!
It's been one year since my first post.  Odd, I know.  But it seems like something to mention.
Not only that, but yesterday I turned a year older.  Year older and wiser...or something like that.  I have spent the past few days romping around Minneapolis with my birthday surprise.  And what that might be you ask?  My boyfriend and best friend collaborated to fly her in for a few days.  AWESOME!  A variety of shenanigans have ensued and I'm still alive.
On forward!  Another year and it's hard to believe how quickly it has flown by!  It only seems right that I continue where it started.  My nephew!  Well, his birthday announcement.  He's turning the big 2!  There couldn't be a cooler kid on the planet and he has a mullet!  So here is to One, Two and 27.  You can figure it out! 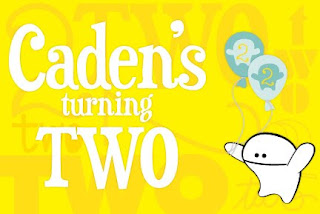 A little about the actual announcement/invite -   That's my monster!  He was inspired by a shower curtain.  (There was this line that made me think of a monster.)  Most of the "2/two"s in the background are done by hand.  The main font is Duality.